Coordinate geometry is mathematics which unites geometry with algebra. Mathematician Rene Descartes (1596 – 1650) introduced the coordinate plane, a grid with numerical markings. Any point on the plane can be located by its values on the X and Y axes, called its coordinates. (This is like GPS coordinates in Google Maps.) Then geometric objects are laid on the plane, and algebraic functions are associated with those geometric objects. This innovation enabled us to do mathematics with either geometry or algebra as needs be.

The simplest geometric object are graphs. A graph is a line drawn on the coordinate plane. The points on the line have the coordinates (x, y). The line is associated with this collection (or set) of (x,y) pair of values, called “coordinates”.

The ingenious concept is to choose the collection of points which OBEY an algebraic function y(x) and declare that the graph (line) also represent the function. So, to work with that function, you can choose to use algebra or geometry, and sometimes both.

There are two plots with one graph each in the picture above. The one on the left is a “straight line” graph, the equation is y(x) = x. The one on the right is a curved line, with equation

Task: Can you verify these functions? Can you show that the above 2 requirements are satisfied?

Note: It is important to realize that the xy graph is NOT a map. The x-axis is not pointing east and y-axis pointing north. The curve drawn on it is not a path on a map. The curve (graph) shows a relation between the x and y coordinates of points on it. It is not a “free path”, it is determined by the equation of the function y(x).

One way to test your understanding of graphs is to change relation between y and x. One common exercise is to show the change by shifting the graph, and determine how the function must change.

Before we do that, I will tell you a “secret”: there is another way to represent the relation between y and x; that is a table. Let us look at the table and the graph of the function 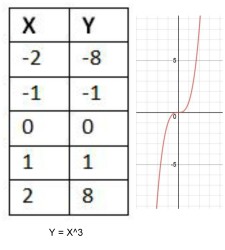 The table shows a selection of values of x and y, and the graph draws the line (also called the locus). You can locate the tabled points on the graph.

and that agrees with the table.

If the y-x relation change, its representations

would all change.  These are some examples:

Comparing the values in the data tables, it can be seen clearly that the values for Y would just be increased by 3, giving the equation

Consider another example of decreasing the values of x by 2, not changing the values of y. The data table would change to this third picture. Plotting the points in the new table would give the graph as shown. Comparing this with the first picture, we see that the graph (locus) has shifted to the left, towards the negative side of the X axis. A smaller (more negative) value of x gives back the same values of y as before. This is not surprising.

Another way to to explain this makes use of “inverse functions“.